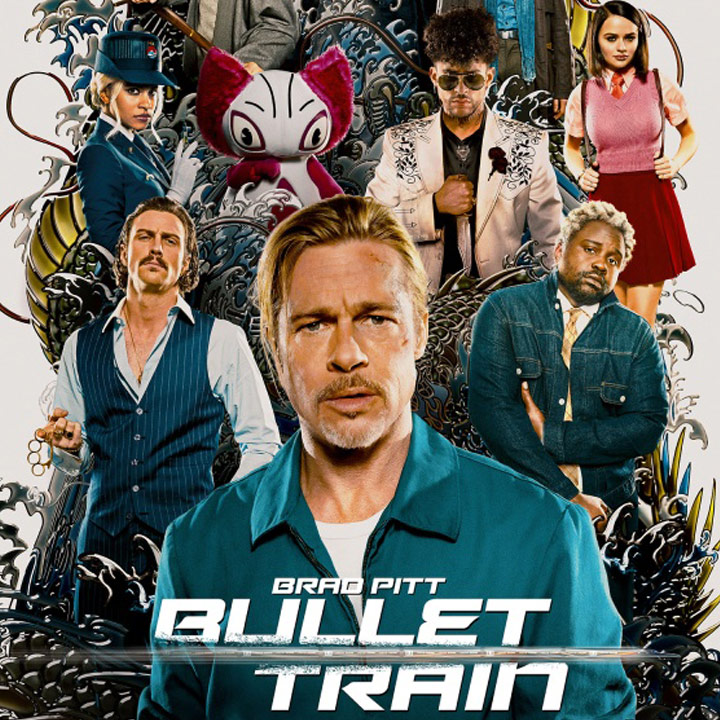 Here's an idea. Close your eyes and try to imagine what would happen if you took the funniest and most kinetic scenes out of – in no order at all – Kill Bill 2, Smokin' Aces, Seven Psychopaths, John Wick and Lock, Stock and Two Smoking Barrels. But then you, crucially, subtracted almost any recognisable emotion or character.

You would be left with just the fights, the stunts, the quips and one-liners, being acted out by a troupe of humans performing as though they were in a cartoon.

And if that all sounds just frickin' awesome to you, then Bullet Train might be just be your favourite film of the year.

Bullet Train doesn't really have a story. Much like Smokin' Aces, it has a contrivance that puts a group of professional assassins in one location at the same time, with competing missions.

In Bullet Train, the contrivance revolves around a Yakuza boss – an improbable Russian – transporting his son, who had been kidnapped, back to the safety of his fortress. The “White Wolf” has hired a couple of British professionals to escort him - –nd the trio are on the high-speed train from Tokyo to Kyoto. Also on board are at least one killer who is after the son, another who is out for revenge on the Wolf – and Brad Pitt's introspective and melancholic thief, who has been tasked with snatching the briefcase of ransom money, which is travelling with the son.

Naturally, most of this turns out to be not quite true. And to find out what's really been going on, you'll have to wait until near the end of Bullet Train, when a well-known actor turns up to explain everything.

The two hours up to that point are basically a good-natured sequence of action and fight scenes, edited together in a way that mostly makes sense, as the various killers try to do each other in, or stay alive long enough to find out what's happening.

Without a stunt choreographer as brilliant as David Leitch to direct – and a cast as talented and game as this, Bullet Train would be an unwatchable mess, or the most popular film of the week on Netflix. Or, possibly both.

But with Leitch (Deadpool 2, Hobbs and Shaw) in charge and Pitt, Joey King and Aaron Taylor-Johnson and Bryan Tyree Henry as the Brit' “twins”, Bullet Train works just fine. Tyree Henry's”'Lemon” even arrives with a set of Thomas the Tank Engine stickers that yield one of the few human moments in the entire film. It is also one of the elements of Kōtarō Isaka's source novel that has survived more or less intact. This probably isn't a coincidence.

There are many, many other actors in Bullet Train, some of them extremely well known and maybe just dropping in to do Leitch a favour. And for those of you who don't know the identity of all the cameos, I won't spoil them here.

Listen, if you thought Gray Man was a bit slow moving, or that Army of the Dead was bogged down with unnecessary dialogue, or that John Wick would have been a better film if more characters were dressed as manga characters – then Bullet Train is the film for you.

Bullet Train is about 20 minutes too long and 20 IQ points too stupid to be a truly great, bad film. But this film knows exactly what it was put here to do – and it mostly delivers. Bravo.