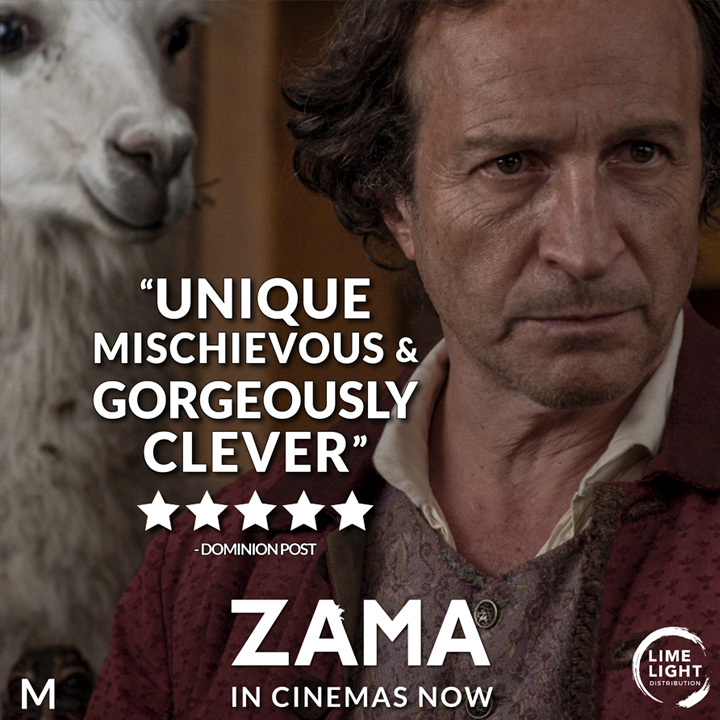 "A textured, darkly funny and wise piece of work"

- Back for general release after New Zealand International Film Festival screenings, Zama arrives already wearing garlands of praise from the great and the good of the international critics and festival curators.

And fair enough too. Zama is a unique, mischievous and gorgeously clever piece of work, almost worth the nine-year wait between director Lucrecia Martel’s last film – The Headless Woman – and this. Martel might have left the enfant terrible shingle behind, but Zama finds her in stellar, maybe career-best form, unpicking a knotty and drolly hilarious period drama of a Spanish government functionary (corregidor) slowly falling apart in the heat and decay of the Paraguayan coast, circa 1790.

Our man Diego de Zama (played by stalwart Daniel Gimenez Cacho – Blancanieves) is in collapse and the only person unaware of the fact is his self. The woman he hopes to marry – or at least seduce – is having an affair with his younger subordinate. The local woman who is mother to his son is openly contemptuous of his belated attempts to be a father.  “Can he speak?” asks Zama, after one attempt at impressing the nipper.

His servants, slaves and the local population mock him even as they mime subservience. His superiors know he is desperate to leave, but will make no effort to help as long as he is still – barely – functional. Indignity is heaped upon indignity, and still Zama will not look around to see that he and the crumbling empire he serves are played-out anachronisms in this new world.

The spiritually withered coloniser being undone and defeated by the voluptuous fecundity of the people and the lands he imagines he rules is a trope as old as literature. But Martel – adapting a 1956 novel – still finds something fresh and provocative to say about the plight of this tragically well-meaning man and his bumbling ways.

Like a benign but impotent Kurtz, Zama is going incontrovertibly insane. But trapped inside the cascading absurdities of colonisation, no one can even tell.

What we see on the screen is a delight. Every scene of portent or attempted seduction is punctured and made farcical by a horse, dog or llama wandering through the back of shot. The enslaved locals look on with perfect bored disinterest within every frame as the pale invaders pretend to know what they are doing.

Martel shoots it all with a straightforward and confidently unshowy style. Fixed cameras look over shadowed interiors with a minimum of editing, respecting the dialogue and action. When the film does escape Zama’s settlement for the plains and swamps in a brisk and exhilarating third act, the absurdity of anyone ever thinking they could truly rule this place is unspoken but deafening.

Zama is a textured, darkly funny and wise piece of work. Material that could have bludgeoned us with its obviousness is allowed to build an argument with wit and sharp humour. Martel is not here to condemn Zama, just to wearily point out the banality of everything his position and weakness compels him to do.

This is a modest but stunning film. Go see.