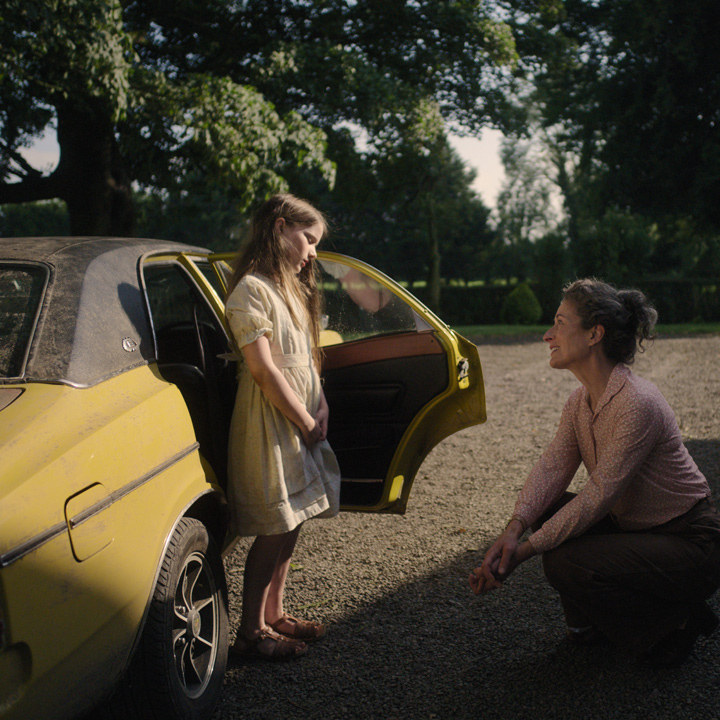 The Quiet Girl (An Cailín Ciúin in its original Irish) is set in 1981.

A young girl – Cait – has been sent to the countryside to live for a while with her mother's distant cousin and her husband. Cait's parents have another child on the way, money is tight and Cait's mother, we are told, is not coping well.

Meanwhile, Cait's new foster parents are a quiet, but not emotionless couple. They are farmers, rough hewn and a little taciturn, but well up to the task of taking in Cait and keeping her safe.

And, in a way, that is all there is to The Quiet Girl. This is not a film of emotional explosions, dark secrets being unearthed, or saccharine nostalgia for some mythical golden age of childhood. The Quiet Girl is a simple, observational and wonderfully contained portrait of lives being lived and of utterly relatable and believable people doing their best in difficult times, all set against a backdrop of Ireland, with its conflicts, tragedies and divisions ever present, but never mentioned or brought onscreen.

In the lead – and in very nearly every scene – 12-year-old Catherine Clinch hands in what must be one of the greatest first-time performances I've ever seen. Cait is a quiet, watchful and resolutely untrusting presence in the farmhouse at first, shunning all attempts to “make her feel welcome”, when she is so confused as to who these people are and why she is there at all. But, as The Quiet Girl progresses, her journey to trust and eventually love these people is as moving, as it is understated.

And I think that's what I admire most about what Colm Bairéad – making his first feature-length film – has achieved here. The Quiet Girl is a succession of deftly sketched and perfectly assembled shots and scenes. There is nothing flashy here, very little camera movement, no distracting flourishes or cues from the soundtrack. It is just a story of people, unfolding with absolute grace and precision.

And, as such, if you are the sort of person who can watch a film without being prodded and manipulated as to what to think and when to think it, The Quiet Girl might just be one of the most moving and rewarding films you see all year.

The only film I can think of to compare The Quiet Girl to, would be Celine Sciamma's extraordinary Petite Maman from 2021. But that gem needed some narrative trickery to keep it percolating, even across a brief running time. The Quiet Girl has no gimmicks, no bluffs and nothing to hide. It is just an honest and perfect act of storytelling. Hugely recommended.

The Quiet Girl is now playing at Light House Petone and Cuba!