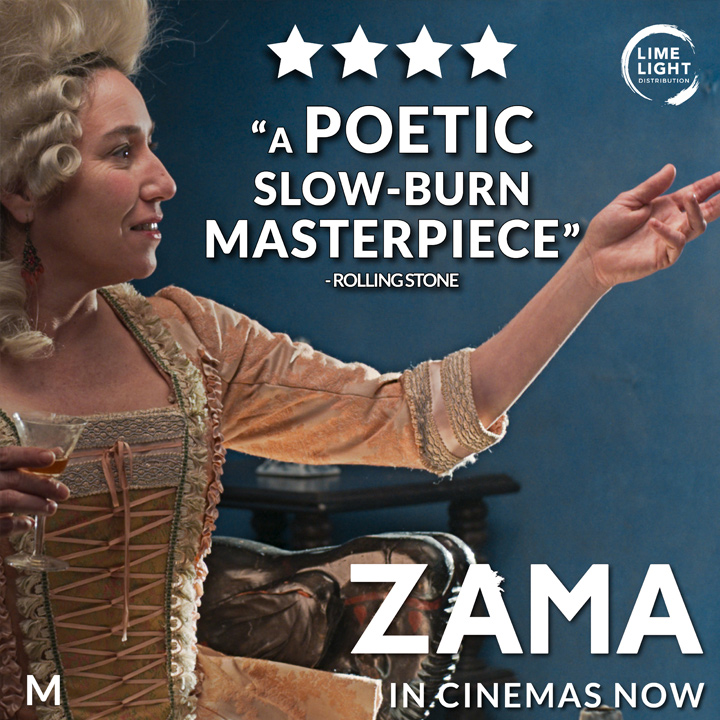 - Argentinian drama about an 18th-century invader going mad is intoxicating, spellbinding – and one of the best movies of the year.

A man in a uniform is standing on the beach, staring at the sea. Natives trudge along the shore behind him. His profile makes him look like a statue, the sort of noble “Hail the conquering hero!” sculpture you’d see in national galleries. His name is Don Diego de Zama (Daniel Giménez Cacho). The place is the edge of Argentina. The century is the 18th. He’s been sent to claim and tame this land for Spain, a good old-fashioned magistrate of the crown in full colonialist bloom. Hearing the sound of laughter behind some rocks, he spies a group of women, naked and coating themselves in mud. After a few minutes, Don Diego is caught: “Voyeur! Voyeur!” they yell at him (or maybe they’re yelling at us). Red-faced, he scurries away up the cliffside. It’s not the last time this invader will be chased off.

Located in the dead center of a Venn diagram encompassing sumptuous costume drama, social commentary and pure cinema, Lucrecia Martel’s extraordinary new film Zama establishes a pattern from the get-go. Her eponymous “hero,” a symbol of European manifest destiny, wants to get somewhere, preferably away from his post in South America, and he will be repeatedly shuffled around. He will also try to establish the authority that has been decreed his birthright and get the indigenous equivalent of the Heisman move, as well as the high hat from his peers, superiors and subordinates. Even animals get in on the action – after he’s read the riot act by the governor of the province he’s overseeing, a llama starts giving him grief (and steals the scene). The man is Job with a cutlass and a tri-cornered hat.

But if all Martel wanted out of adapting Antonio Di Benedetto’s 1956 novel was to take the piss out of imperialism, this intoxicating, spellbinding vision of the past would not have been half the masterpiece that it is. A cockeyed fable on her country’s history and a sideswipe at an empire crumbling under the weight of hubris and madness, Zama is more than a portrait of the loneliness of the long-distance foreigner. It’s the sort of immersive cultural transmission that reminds you just how powerful and transportive this medium can be – one of those rarities that can momentarily jolt you out of your ways of seeing things. Poetic is a word that gets thrown around willy-nilly, but it fits perfectly here. So does woozy. It feels less like a film than a high fever, burning slow but hot in order to incinerate a virus.

And frankly, Don Diego doesn’t need a written invitation to leave his adopted homeland. Written permission, yes – his requests for transfer have yet to receive a royal response. (They’d have to be sent first; the Governor has told him that it usually takes a few tries before Her Majesty grants such bureaucratic favors, so really, why should the bored politician bother submitting them?) But Zama is ready to return to life outside of the occupied sticks, to see a family he hasn’t heard from in eons and to move to a place where he feels less claustrophobic. In the meantime, Don Diego passes the time listening to a minister’s wife (Pedro Almodóvar regular Lola Dueñas) complain and flirt and order her servants around, and bearing witness to a fellow white-wigged middle manager (Juan Minujín) using enhanced-interrogation techniques on the locales. A brawl gets our man exiled to the edge of the territories, sentenced to a life waiting in a sort of halfway-house hut populated less by guests than ghosts.

By the time Zama sends its bearded, disillusioned hero into the jungle in search of a famed outlaw and a purpose, the movie has already given us gorgeous imagery galore – Portuguese cinematographer Rui Poças has a knack for combining beauty and rot, giving you the feeling that you’re looking at museum pieces through a patina of mildew – and the sense that the terrain itself is expelling the “civilized” world one conquistador at a time. The third act then proceeds to go into full surreality-bites mode, staking its own claim at the corner of Herzog St. and Buñuel Ave.

But anyone who’s dipped into this Argentinian writer-director’s pitifully small back catalog (if you haven’t, go straight to The Headless Woman) will tell you that this is the work of a singular artist – someone who knows how to correctly crowd a frame for maximum impact, when to drop in a Polynesian-sounding score and how to get her actors to channel existential malaise. She’s already made the case for being a world-class filmmaker, but this movie suggests a grander perspective at work, which connects the dots between her previous class-conscious, character-based explorations of moral slipperiness to a narrative about centuries of exploitation. History just repeats, it cautiously hints. Only the hats change.

So we leave Don Diego wounded and floating on a river to nowhere, heading miles downstream to meet Aguirre on his raft of monkeys or Fitzcarraldo on his boat or Kurtz in his compound or wherever it is that madmen who took on Mother Nature and lost go to grouse. He came, he saw, he was conquered and cast away. As for viewers, they’ll be left high on the fumes of a master. Zama helps to remind you that man’s inability to realize that he can’t impose his corrupt will on everything is an endlessly looped folly. That, and the fact that there are few buzzes more potent than recognizing a great work of art when you see it.